According to Dr. Chen Deng Hai – “For patients of critical diseases, triterpenoids as an effective constituent of Lingzhi offer remarkable curative benefits.

As such, we were inspired to work on bringing about a com-positional realignment of this effective constituent in the product. However, this was easier said than done. We had not been able to achieve this through the traditional methods of extraction and concentration, but had to rely on the state-of-the-art purification techniques.

In fact, triterpenoids as a special group of compounds are found naturally occurring only in Lingzhi.

Our collaboration with Taiwan National Research Institute of Chinese Medicine has led to the discovery that triterpenoids also possess anti-fibrotic effects. Besides, triterpenoids have been shown to be helpful in reducing inflammatory symptoms in the respiratory tract and liver as well.

“During the 1970’s and 1980’s, the bio-tech fraternity tended to be in favour of research works involving polysaccharides, which could be more readily isolated and were much richer in compositional percentage.

In contrast, research works in triterpenoids were not popular, as this constituent of Lingzhi was simply too difficult to be isolated and was available only in minute traces.

It was not until a later stage, and thanks to successful large scale artificial cultivation of Lingzhi and the discovery of triterpenoids, notably ganoderic acids, that researchers began a serious study in this special group of effective constituent in Lingzhi.

The end of 2005 saw an increasingly bigger number of research papers pertaining to new findings on the anti-cancer attributes of triterpenoids, which led to the confirmation that the content of triterpenoids, to be followed by polysaccharides (peptides) and adenosines in that order, is the primary factor differentiating a superior Lingzhi spawn from the less efficacious ones.

Among the various effective constituents of Lingzhi, as polysaccharides merely play the indirect role of beefing up our immunity to ward off viral attacks, their consumption in large doses is not necessary.

On the other hand, since triterpenoids are directly involved in waging wars against the intruding viruses or cancel cells, the higher their consumption dosage, the better it would be the health improvement benefits for patients suffering from critical diseases. 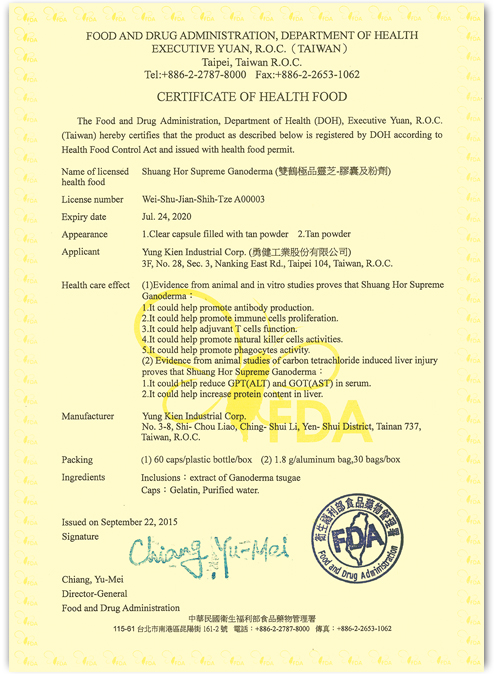 (A) Based on the results of experiments carried out on animals and in vitro (outside the body) tests with functions as shown below:

(B) Based on the results of animals tests, in which carbon tetrachloride was used to inflict damage on mouse liver with functions as shown below:

1. Helps reduce the indices of GOT and GPT.
2. Helps increase the protein content in the liver.

There are no reviews yet.

Be the first to review “Yung Kien Ganoderma” Cancel reply

We would Love to Help. Feel Free to say Hello!